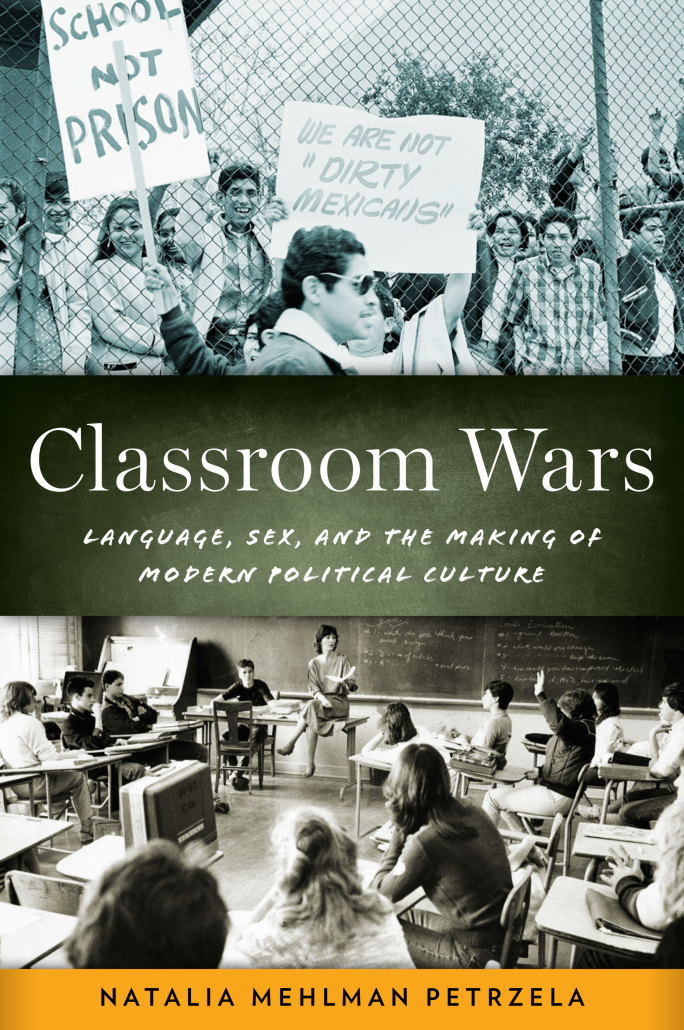 “No matter which way your politics lean, you won’t be able to understand modern American conservatism without reading this brave and original book.” – Jonathan Zimmerman, Professor of History and Education, New York University

From Cultural Appreciation Days to Gay-Straight Alliances to cafeteria menus featuring “ethnic options,” twenty-first century American public schools bear the unmistakable mark of the diversity that has come to define the nation in the last fifty years. At the same time, it is also in public schools where citizens continue to organize most passionately to limit the influence of this heterogeneity on our curricula and classroom culture.

Classroom Wars explores how we got here. Focusing on California’s schools during the 1960s and 1970s, historian Natalia Mehlman Petrzela charts how a state and a citizenry deeply committed to public education as an engine of civic and moral education navigated the massive changes brought about by the 1960s, including the sexual revolution, school desegregation, and a dramatic increase in Latino immigration.

In California, where a volatile political culture nurtured both Orange County mega-churches and Berkeley coffeehouses, these changes reverberated especially powerfully. Analyzing two of the era’s most innovative, nationally impactful, and never-before juxtaposed programs – Spanish-bilingual and sex education – Classroom Wars charts how during a time of extraordinary social change, grass-roots citizens politicized the schoolhouse and family. Many came to link such progressive educational programs not only with threats to the family and nation but also with rising taxes, which they feared were being squandered on morally lax educators teaching ethically questionable curricula.

Using sources ranging from policy documents to personal letters to student newspapers to course evaluations to oral histories, Petrzela reveals how in 1960s and 70s California – and the nation at large – a growing number of Americans fused values about family, personal, and civic morality, blurring the distinction between public and private and inspiring some of the fiercest classroom wars in American history, controversies that help explain the bitterness of the battles we continue to wage today.

Classroom Wars is an intelligent, compelling study that connects the seemingly distant policies of bilingual education and sex education to shed new light on political culture. It is an excellent history that ingeniously challenges interpretive narrowness and will be influential in several different historical fields.

Mehlman Petrzela is one of the first scholars to bring together two flourishing bodies of historiography: the now massive literature on the rise of the modern American conservative movement and the smaller but expanding corpus of work on Latino/a Americans since the landmark 1965 Hart-Celler Act. That so few historians have yet to couple these two topics is surprising given that hostility to brown-skinned Mexican immigrants has become one of the defining sensibilities of contemporary American conservatism. Mehlman Petrzela breaks important new ground here.

Admirably and provocatively, Petrzela draws multiple connections between subjects often treated separately: between bilingual education and sex education; between bilingual education, sex education, and the property tax revolt that began in California and swept through the nation; between cultural politics in the classroom and fiscal politics over school funding; and between educational history/historiography and political history/historiography.