How I got here

“To possess all the world of knowledge and lose one’s own self is as awful a fate in education as in religion.”

John Dewey, The Child and the Curriculum (1902) 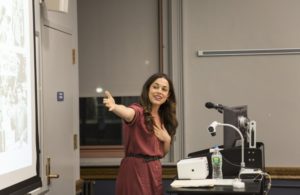 I love teaching the work of philosopher John Dewey, not only because my students thrill at the idea that an excellent education should both acknowledge individuality and cultivate intellectual curiosity but also because Dewey articulates a theory that encapsulates my own worldview as a scholar, teacher, writer, and activist. Our identities shape how we produce and consume knowledge; acknowledging and embracing these connections stand to make our scholarly and activist contributions more powerful and original and to enrich our inner lives.

The acquisition of knowledge has always been core to my sense of self. The most important event in my life was learning to read. As a little girl devouring books, magazines, street signs, and menus, I remember feeling possessed with incredible power; I no longer had to rely upon adults to make sense of the world for me. The more I read, the more expansive that world became, as did my desire to absorb it, and soon, to share my passion with others. By age five, I corralled my parents in the kitchen for nightly “lectures” about everything from the weather to the presidents and pioneers who peopled my accounts of a vaguely defined “olden days.”

In some ways, I was a born educator. It wasn’t famous actors or athletes who fired my dreams about the future; it was the authors and teachers throughout my schooling who wowed me with their expertise and inspired me to develop my own. Participating in formal educational environments as both teacher and student so powerfully shaped my identity and interests that my first book, Classroom Wars, takes up a series of schoolhouse battles as a lens through which to understand our broader political culture.

Our identities shape how we produce and consume knowledge; acknowledging and embracing these connections stand to make our scholarly and activist contributions more powerful and original and to enrich our inner lives.

It wasn’t famous actors or athletes who fired my dreams about the future; it was the authors and teachers throughout my schooling who wowed me with their expertise and inspired me to develop my own.

A life of the mind was clearly my calling, and I pursued that path voraciously and completely. Early on, I embraced my identity as a “smart girl,” later staking much of my identity on the prestigious institutions where I have been fortunate to study. Though I would only understand it later, even as a young girl I subscribed to René Descartes’ idea that the body and mind were fundamentally separate, and considered myself lucky to be able to find tremendous fulfillment in cerebral pursuits, which I, and Descartes, considered more elevated.

Intrepid as I was in the classroom, I felt completely intimidated in the physical realm. As a teenager fed up with the regular humiliation of my lackluster performance in physical education class, I opted for an “independent study” that secured me an extra period for schoolwork and more importantly, an escape from my classmates bearing daily witness to my physical ineptitude.

Sixteen years old, I signed up for Step Aerobics at the local Jewish Community Center, and alongside spandex-swathed women twice my age, struggled to keep up with the syncopated music and strangely-named steps. Despite my initial lack of rhythm and interest, I had no choice but to stick with it or return to P.E.

Within a few weeks, I couldn’t believe how much I craved the exhilaration that came from stacking my risers higher and higher and mastering routines that had seemed unfathomably complex just sixty minutes earlier. Never before had I enjoyed physical activity — I dreaded it — nor had I considered my body anything more than a reasonably healthy bag of bones of flesh encasing my far more valuable mind. I passed P.E., and for the first time ever became aware of the potential for exercise to transform my muscles and my mood.

Well into early adulthood, as my interest in historical study deepened, I often teased that “in another life, I’d be an aerobics instructor.” It was only a joke because the pursuits of academia and athletics felt so incongruous. Unwittingly, I still held fiercely to that Cartesian dualism, believing that the catharsis of jumping jacks and step-touches was incommensurate with intellectual gravitas.

By my twenties, thanks in part to a brief stint on an especially macho stretch of Wall Street, I strongly identified as a feminist, and sensed that finding inspiration in a room of sweaty women moving rhythmically to incantations about “torching” fat in penance for calories consumed or in preparation for bikini season was on some level a betrayal of the sisterhood.

A few years later, delving into dissertation writing, I sought diversion from the enormity of this task at the gym. Unexpectedly, I found there a mind-body class called intenSati that provided the same kind of purgative sweat that had sustained me for a decade, but which eschewed the rhetoric of body hatred for declarations of discipline, enthusiasm, and self-acceptance. Though skeptical of the personal empowerment industry from which this class drew much of its inspiration, I couldn’t deny how great I felt afterwards, that the dissertation was actually getting done, and that I was somehow less affected by the massive anxiety that has become synonymous with graduate school and job-searching in the humanities. By 2007, I was a certified intenSati leader, bracketing my days of writing with packed pre-dawn or evening classes I taught around New York City.

Well into early adulthood, as my interest in historical study deepened, I often teased that “in another life, I’d be an aerobics instructor.” It was only a joke because the pursuits of academia and athletics felt so incongruous. 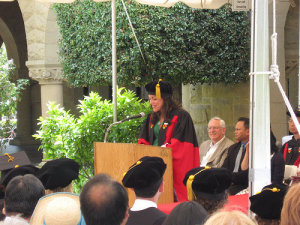 Leading group fitness felt surprisingly similar to academic teaching, which I had always loved. Voice was crucial; I worked hard to temper the language of individual empowerment with that of community, to balance self-acceptance with discipline, and to celebrate a tough-minded optimism without succumbing to the delusional magical thinking favored by much self-help. I found myself especially energized by applying tactics I’d honed in the classroom to the studio: engaging students not only with me but with each other, including students with wide-ranging ability levels, and adapting class content to different learning styles. Vice versa, the commanding presence I practiced leading intenSati came through in my teaching and presentation. As my college students invested themselves with new energy, for the first time I was acknowledged specifically for “delivery” at academic conferences. One course evaluation, about which I still feel deeply ambivalent, relayed: “She is exceptionally confident for a young, female professor.”

If I found a way to reconcile my commitments to fitness and to feminism, it took longer to understand how teaching wellness squared with my academic life. 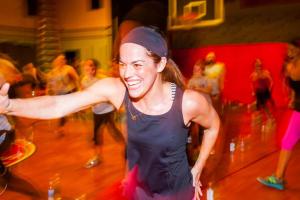 If I found a way to reconcile my commitments to fitness and to feminism, it took longer to understand how teaching wellness squared with my academic life.

When I was hired as an assistant professor and friends and family assumed it was time to abandon my grad-school hobby, I politely reminded them that my intellectual successes were intertwined with what had, a decade in the making, become a robust physical life. On some level, I was a Cartesian no more. Similarly, when breathless and well-intentioned gymgoers would approach me after class and declare that I should quit my day job (what do you do again anyway?) and teach fitness full-time, I’d respond with similar conviction that I loved academic life and had no intention of leaving it. These conversations, rehashed many times, were frustrating but were also of my own making: for years I resisted telling my academic colleagues about my fitness life at the peril of appearing unserious, and kept my academic career quiet at the gym for fear of my former gym-class failures being revealed.

As fiercely as I guarded this boundary, such compartmentalization was untenable. A life-size poster of me hung in the local lululemon athletica store just blocks from campus and fellow faculty and students attended the gym where I taught. This separation of the physical and the intellectual was also completely out of step with the ideas I imparted in the the seminar room and the fitness studio. How could I enthusiastically teach Dewey, Jung, and Locke’s conceptions of a united self, and at the gym, urge students to “step into their greatness” and to cast off social expectations to carve their own path, if I did not do so myself? At first tentatively, and then zealously, I heeded Dewey’s advice that “the educational process is one of continual reorganizing, reconstructing, transforming,” and began bringing these worlds together.

Today, my scholarship, teaching, and wellness activism all bear the influence of my blended identity. I continue to assign Descartes in my courses about the history of self-help and wellness culture, but the philosophies that drive me are Dewey’s, as much for his emphasis on fueling a passion for learning as for his celebration of the interconnectedness of the whole self. My latest research explores the rise of wellness culture since the 1950s, asking why food and fitness regimes have become so popular in the last half-century, and how these physical endeavors have changed the way Americans define their bodies and themselves. As co-founder of HealthClass2.0, I educate my college students on the delicate racial and class dynamics that shape their interventions in New York City public schools, where they facilitate an experiential wellness education curriculum, emphasizing food and fitness education as path to developing critical thinking skills and sense of self.

This site unites the diverse pursuits that fuel my own passion to keep learning and growing, and presumes that the realms of knowledge and selfhood are intimately intertwined, and constantly evolving. Welcome.

Tweets by @nataliapetrzela
Scroll to top